skip to main | skip to sidebar

Can be heard here: http://ops.esu8.org/groups/teach42morrow/weblog/7407d/Christmas_Message_about_24_7_Learning.html

Merry Christmas Everyone!
Posted by Katie Morrow at Friday, December 18, 2009 No comments:

Play the Friend Finder Game and see how high you can score!

http://www.onguardonline.gov/games/friend-finder.aspx
Posted by Katie Morrow at Thursday, December 17, 2009 No comments: 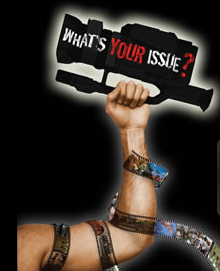 Apple is pleased to announce participation in a new film competition, and we welcome your participation and the involvement of your students in the What‚s Your Issue? - Film Your Issue initiative and competition which launches in January 2010.

Apple is supporting the exciting and important competition, along with YouTube, Best Buy, the NAACP, Association of American Colleges and Universities, the Obama administration, and others.

Young adults 14 to 24 are being invited to develop and present innovative solution-project ideas to front-burner issues, in one of eight categories: environment, education, health/ healthcare, poverty, public service, national security and defense, the economic recession, and human and equal rights.

Winners will be selected by both a VIP Jury and public online via YouTube.

Winning solution-projects will be presented to senior officials in the Obama administration, broadcast on screens in every Best Buy store on the planet, at a VIP reception in Washington, DC, and flown to Los Angeles for the Awards ceremony co-hosted by Sony Pictures Studios. Prizes include an Apple MacBook and iPhones.

The format for submission is a 3-minute video, presenting both the issue and proposed solution-project idea. At the time of submission, the video will be uploaded along with an accompanying one-sheet outlining the project.

Details of the competition are on the What‚s Your Issue- Film Your Issue Website
http://www.whatsyourissue.tv
Posted by Katie Morrow at Wednesday, December 16, 2009 No comments:

Welcome to our blog!